Read about Sieng Lee’s recent project, “Minnesota Pandemic Remembrance” that was on display in 2020.

From far away the pillars outside WBCA appear to be covered in an icy shade of blue, reflecting the sky and hinting at the oncoming deep freeze of winter. As you get closer, it becomes clear that the pillars are covered in those ubiquitous blue medical masks. Layer after layer, they never seem to end. If you were to ask Artist in Residence Sieng Lee, the artist behind the installation, how many masks cover the pillars, he could give you an exact number: 2,500. Each mask represents a Minnesotan we have lost to COVID-19. Through his latest outdoor installation, titled “Minnesota Pandemic Remembrance,” Sieng sought to personalize the overwhelming, often paralyzing toll of the pandemic. “It started with the idea of trying to create something that had more impact at the art center, that really talks about what’s happening in art, and what’s going on during our time right now,” he said. By making each death a concrete, visual symbol, rather than just a number on paper, the death toll feels real, and at the same time unimaginable.

For Sieng, the pandemic is deeply personal. He has lost family members during this time, and not been able to fully grieve alongside his community. “When there’s loss, we gather,” he said. “Multi-generational families gather together for funerals, to just grieve. And at a time like this you don’t have a time to grieve in that sense, and you can’t really come together and help support each other.” It’s a balancing act of keeping each other safe, while still keeping rituals and traditions alive.

Throughout his artistic career Sieng has transitioned from more personal installations to art that reflects a common experience. These pieces are often interwoven with themes of memory. In his installation at the Minneapolis Institute of Art, “Siv Yis and His Wooden Horses,” Sieng arranged tens of thousands of paper boats across a vast wall. According to Sieng the boats “symbolize lost memory and tradition that are rooted in some of [my] work.”

Sieng’s mask installation helps us to remember, even when it might be painful. “When there’s loss,” he said, “you don’t just lose the physical person. I think that everything that binds each one of us together is also lost at the same time. And of course that includes memory. Memory of the person, memory of places, memory of the current time that you are.” 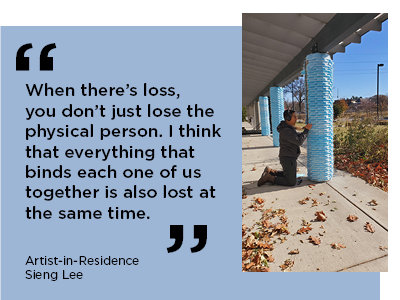 The masks also act as a timepiece, marking this very moment, to help us remember a time we haven’t yet processed. “I really believe that we fully haven’t been able to have that process to really think about where we are now,” Sieng said. “We’re so afraid for our own selves that we can’t really truly visualize what’s happening to other people at the same time. But post-pandemic I think there’ll be a big reflection about where we are as Minnesotans and as neighbors.” So not only is the piece telling a story everyone can relate to, it also opens up a space, either now or in the future, for us to consider the pandemic’s impact on those around us.

Can you ever really separate the personal from the universal? Sieng sees his work as drawing on personal experiences, “but re-interpreted, and reworked into something that is beyond more than just about me.” Still, it’s hard not to put a piece of yourself into your art. Sieng has a second installation outside of WBCA, made in collaboration with Outreach Director Kyle Frederickson, with each artist painting a side of a large wooden heart. Sieng’s side is a vibrant yellow, evocative of police tape, with the timestamp 8:46 emblazoned at the top. This represents the length of time Derek Chauvin knelt on George Floyd’s neck. “Even the heart with 8:46,” Sieng said, “it speaks not only just for what it stands for, but it’s also reflective of who I am, especially as an Asian-American and somebody who definitely has had run-ins with the police that are personal.” At the same time “it talks about something that’s much bigger than who we are.”

In the end, the bold yellow heart and icy reality of the masks are something deeply personal to Sieng. And even he himself is still processing the work. “You don’t fully understand [your own artwork] until down the road,” he said. “I’m still trying to figure out why I made it, or what purpose it serves.”